Some Interesting Audi Trivia and Why They Need Relatively Little Repair

Audis are works of art on wheels. These cars aren’t just luxury vehicles, they are practical, too. We’ve noticed Audi’s skill at providing both fun and reliability at our Cincinnati auto garage after years of driving and repairing Audis. These are extremely well built cars. They’re built to last and don’t require as much repair as other cars. As it turns out, Audi has a long history with quality. Here’s a little about that history and why even after all of these years Audi continues to sell some of the best European vehicles on the market.

The name Audi is actually Latin for “hear.” August Horch founded his first car company, A. Horch & Cie. in 1899. Disagreements with his Chief Financial Officer forced him to leave his own company and start out anew with a new brand. He soon learned that his own name was now copyrighted by his previous effort, so he decided to think outside of the box. He changed the new company to the Latin translation of his German name. Horch in German means, “hear,” which is also what Audi means in Latin.

Audi’s Intersected Rings and the Merging of Their History

So what’s the symbolism behind Audi’s intersected rings? That’s a question that many Audi enthusiasts and Audi mechanics don’t know the answer to. But it’s actually meant to represent the time in early Audi history when 3 brands merged in 1932 to form a single brand under the Audi name. The 3 brands were DKW, Horch, and Wanderer. Each maintained their own brand identity at first—and the 4 ring symbol we now known as Audi was saved for high performance sport racing cars. Over time, however, any car made by Audi shared that symbol.

Nobody knows who came up with the design, but many suspect the official Olympic symbol may have served as inspiration for the symbolism of the interconnecting rings. That makes sense to us. Whenever an Audi shows up in our Cincinnati auto repair shop, we know it’s a vehicle of quality that holds up to outstanding Olympic standards of performance and achievement.

Audi and Safety: An Early Pioneer of the Modern Crash Test

One of the reasons Audi’s feature some of the best car bodies when it comes to impact tests is that the company was actually one of the first to conduct crash tests. These early tests, however, were a far cry from the modern crash test facilities that we have today. They didn’t use dummies or high speed cameras. Instead, they simply pushed a car down the hill and watched it smash into a brick wall. Due to learning what would happen when you run your car into a wall, and adjusting their designs accordingly, after crunching to a stop—the car was relatively undamaged and still running. That’s just one of the reasons Audi repair is less frequent in Cincinnati than repairs of most other cars. Audis are truly built to last.

Audi, then under the Auto Union name, had an epic rivalry with Mercedes. Ferdinand Porsche, who later launched the Porsche, was then in charge of designing the high-speed contenders for Auto Union. When trying to figure out how best to defeat Mercedes, he ingeniously placed the engine behind the driver to save weight, which also improved the distribution of that weight for better handling.

This car, the Auto Union Type C, was powered by a V16 engine with 560 horsepower, and reached 268.4 mph on the Autobahn. Despite this impressive speed the car was still narrowly beaten by a mere 4/10 of mile per hour by a Mercedes. 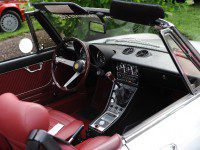 For your convenience, you can schedule a service online or even ask an expert about your fine European or American vehicle.
Schedule a Service

How Often Do You Need a Radiator Flush?

Like everything else in this world, radiators get grungy overtime. Either the radiator itself can become dirty, or the water and antifreeze mixture gathers too many impurities that render your radiator ineffective at cooling the engine, or freeing up in cold weather. That’s why the general rule is to flush your radiator every 40,000 to 60,000 miles. This can vary according to the climate you drive in, your driving habits and the quality of antifreeze you use. A good way to test your radiator is a simple litmus test available at most autoparts stores. All you have to do is stick the test strip into the radiator fluid and follow the color guide on the back of the box.